Well, St. Patrick's day has come and gone. I've known many St. Patrick's where SOMEONE has been "over-served" as my children (adults) would say. The humiliations that happen on March 17th are probably historic in their numbers. But humiliation doesn't have to be alcohol driven-as was mine. I was stone-cold sober. I didn't have a drink this St. Patrick's day-it kind of seems counter-productive considering the number of medications that I am on. Which brings me to the reason why: my blood sugar seems to have plumetted from avery high number to a very low number-43 to be exact. To those of you who aren't in the "know", a 43 blood sugar is far from the 100 that is a perfect blood sugar. I wear an insulin pump which is supposed to be sending an alert if I go below 80. That did not happen-not sure why. Let me explain:
We had headed up to Vrooman's Hotel, our local watering spot in Caroga Lake. We were planning on having corned beef and spending the night at Karaoke. We take our karaoke very seriously here in Caroga. It is a full house every time they offer it, and the St. Patrick's dinner party was another incentive to be there-all in all it was turning into a great night for the Irish!  Wearing or green we entered the dining room and came upon some good friends from the lake, summer people who had ventured up to Caroga for a weekend-the weather was magnificent and we all had stories of how we'd spend our day-with 70 degree weather. Jerry and I had spent the day working at our lake cottage, which is one bedroom closer to being done. We worked like dogs. Or should I say we worked like the Irish? We were looking foward to a nice corned beef and cabbage dinner, and sat waiting at the table for a bit, in lively conversation and lots of laughs. I was feeling pretty good considering I was exhausted from a day at work. Our dinners were delivered to the table, and I began to eat. Somewhere between starting to eat and the cabbage incident, I felt it necessary to test my blood sugar, since I normally test before a meal. With my pump in hand, apparently I went down. Right into my corned beef and cabbage.  My head hit the plate, thankfully, because the table could be pretty hard. Jerry who was sitting directly across from me, saw it happen and was up on his feet immediately to catch me before I fell out of the chair. Have I ever mentioned that he is my hero?  I think so. But it never hurts to say it again. It was quite dramatic to those at the table, but it was more discree to the other diners than if I had completely gone down. I was up within a few seconds, but a little woozy and a little nauseous. And so, with two girlfriends in tow, I made my way to the ladies room. Jerry had given me a couple of glucose tablets, and I was beginning to feel more like myself. I went back to the table and finished my dinner, uneventfully. I was not feeling up to Karaoke, and we headed home early. Not the St. Patrick's we had planned.
It wasn't until the next morning that the horrifying reality dawned on me. I had fallen into my corned beef and cabbage on St. Patrick's day!  I was so grateful that I had not passed on during this episode.  For obvious reasons. I'm not ready to go yet-I have a lot of life in me!  But I could just imagine the narrative-"How did she pass?"  "Oh, she fell into her corned beef and cabbage on St. Patrick's Day-but she was sober."  "Right."  What else could they say? It is not the way I want to go for sure. I'm sure you can see my point.  I'm hoping that when my number is up, I'm doing something fabulous like singing or dancing. Going out with a song!  But I will say this. Never did I feel more like a beer than I did the day AFTER St. Patrick's Day.  It would have helped aid my humiliation.

Thank you, thank you!

What's On The Wheel 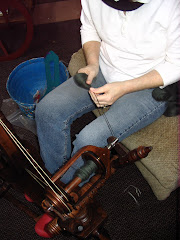 Digging Out Some Alpaca to spin!

What's on the Sticks

Just small junk of no importance. Can't seem to focus.

After suffering a heart attack in 2007, it became clear that I had to make some lifestyle adjustments. We were already owners of a rustic cabin in upstate New York. Once we established that my retirement from my job as Secretary to the Chief of Police on Long Island would be a huge financial burden we decided that moving permanently to our unfinished cabin would be the best way to make the necessary changes for my health. After securing "permission" from our youngest daughter, who at 13 would be making the move with us, we made the move in June of 2008. Our four oldest children still reside on Long Island, along with our families and old friends. It has been a tremendous journey, both physically and emotionally, but we've done it! This is the story of our journey, and our ongoing experiences as middle aged lovers of life. We are truly all in this together! Jennifer

Why I write this blog

Because I love to write-plain and simple. Some days I feel what I have to say is important and relevant. Other days, I have trouble writing my name. It is a life of ups and downs, and I hope to write enough that we can someday look back at what was going on, and remember the feelings that were so important at the time. If you are reading this blog, I hope you find it relevant. Or not. But it does matter to me.